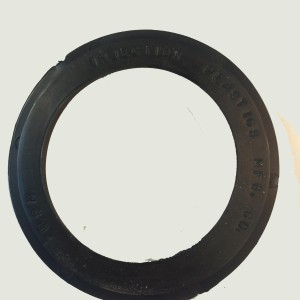 Uniseal® is simply the world’s best seal and installing the Uniseal® is a simple process. After cutting a hole in the wall of a tank or other surface, the seal is inserted. Then the pipe is coated with a slippery detergent (i.e. dish soap) and pushed into the seal.

Uniseal® products replace traditional plumbing hardware with a single injection molded unit requiring no component parts. It was designed to solve many of the issues of pipe to tank connections. For many industries pipe to tank seals are traditionally among the most complex connections to manufacture. Traditional seals require multiple parts such as, rigid flanges, bolts, washers, o-rings, along with long assembly times and high production costs.

The Du Pont Alcryn® is the key to the liquid-tight seal. When the pipe is pushed through the rubber-like Uniseal® from the outside, the inside Alcryn® wall becomes thin enough to allow the pipe to squeeze through and then forms a liquid-tight seal. The coefficient of friction with the plastic pipe is roughly three times higher than any other material which allows it to create a better seal than with any other material. In static conditions the seal is good up to 65 PSI. Uniseal® can withstand pressure, and suction, acids, oils, greases, gasoline, sewage, waste, heat and cold. It offers long life, easy installation and reduced labor and material costs

There are no reviews yet.

Be the first to review “Global Aquaponics 3” Uniseal” Cancel reply